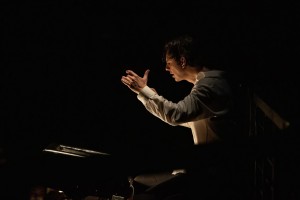 Founder and Music Director of musicAeterna Ensemble and Choir

Founder and Artistic Director of the Utopia Orchestra

Teodor Currentzis is the Chief Conductor of the SWR Symphony Orchestra Stuttgart and Artistic Director of the ensemble musicAeterna and of the musicAeterna Chamber Choir. The ensemble was resident at Perm Opera and Ballet Theatre from 2011 till 2019. In July 2019, Teodor Currentzis stepped down as artistic director of Perm Opera in order to focus on leading musicAeterna to new heights as an independent, privately financed ensemble. This year (2022) Teodor presents his new international orchestra – Utopia. The first Utopia concerts will be given in October to include Philharmonie Luxembourg, Laeiszhalle Hamburg, Wiener Konzerthaus and Berlin Philharmonie.

In 2018/19 his first year with SWR, Teodor conducted Mahler Symphony No. 3 & 4, Tchaikovsky Symphony No. 5 and Shostakovich Symphony No. 7 in performances in Stuttgart and on tour visiting the Vienna Konzerthaus, Hamburg Elbphilharmonie and Cologne Philharmonie amongst others. He finished his first season with SWR with a final performance of Shostakovich 7 at the Salzburg Festival.  He has continued his touring tradition with SWR each season most recently with Jorg Widmann’s Viola Concerto (Antoine Tamestit), Shostakovich Symphony No.5.  This season, his programme includes Ravel Bolero, Stravinsky’s Rite of Spring, Henk de Vleiger The Ring and Alexey Retinstky Tristan.

Future guest conducting engagements include Teodor’s debut with the Concertgebouw and a return to the Berlin Philharmonic.

With musicAeterna, Teodor regularly tours Europe with performances at the Berlin Philharmonic, Philharmonie de Paris, Baden-Baden Festspielhaus, La Scala Milan and the Madrid Auditorio. They have a long-standing relationship with the Salzburg Festspiele; performances in Salzburg include a new production of La Clemenza di Tito directed by Peter Sellars in 2017 which transferred to Dutch Opera where Teodor made his debut in 2018, a full Beethoven symphonies cycle in 2018 in five sell-out concerts, Idomeneo in 2019 directed by Peter Sellars in collaboration with the Freiburg Baroque and the musicAeterna choir and Don Giovanni in the 2021 Festival. Teodor and musicAeterna made their BBC Proms debut in 2018 and made their Japanese debut in February 2019 with concerts in Tokyo and Osaka. In November 2019, they made their New York debut at The Shed with Verdi’s Requiem alongside moving images from the late Jonas Mekas.

Past highlights of Teodor’s career include: his debut with the Berlin Philharmonic with Verdi’s Requiem and the musicAeterna choir; Resident Artist at the Vienna Konzerthaus beginning 2016/17 including concerts with Vienna Symphony Orchestra, Camerata Salzburg, SWR Symphony orchestra and musicAeterna; performing Brahms Requiem with musicAeterna choir and the Mahler Chamber Orchestra as part of the Diaghilev Festival, Perm and on tour in Europe; a tour with Mahler Chamber Orchestra of Berio’s Coro; Clemenza di Tito and Mozart’s Requiem at Salzburg Festival, Verdi’s Macbeth at Zurich Opera with Barrie Kosky (2016); Wagner’s Das Rheingold with musicAeterna orchestra (2015, RUHRtriennale in Bochum); Tchaikovsky Iolanthe and Stravinsky Persephone at Aix Festival (2015) which premiered in Madrid in 2012; Purcell’s The Indian Queen in Madrid (2012); Shostakovich’s Lady Macbeth of the Mtsensk District in Zurich (2012) and Weinberg’s The Passenger with the Vienna Symphony Orchestra in Bregenz (2010).

In 2017, ECHO Klassik awarded the DVD/Blu-ray production of Purcell’s Indian Queen, directed by Peter Sellers, with Teodor and musicAeterna, following on from a previous ECHO Klassik award in 2016 for ‘Symphonic Recording (20th/21st century music)’ for their recording of Stravinsky’s Le Sacre du Printemps, both released on Sony Classical. In 2015, Teodor and his brother Vangelino Currentzis, recorded and composed the soundtrack of the European Games opening ceremony in Baku and were nominated for an Emmy Award, in the category of Outstanding Music Direction and Composition. Teodor Currentzis was the recipient of the Toepfer Foundation’s prestigious Kairos Award in 2016. The same year, Opernwelt named Teodor Currentzis Best Conductor of the Year for his Macbeth at Zurich Opera.

Teodor has so far been awarded nine Golden Masks – most recently in 2017 as Best Opera Conductor for La Traviata, a Perm Opera production directed by Robert Wilson. Previous awards include the Best Opera Conductor award (Indian Queen 2015 and Cosi Fan Tutte, Perm 2013 and Wozzeck, Bolshoi 2011), for a “brilliant performance of Prokofiev’s score” (Cinderella, 2007) and for “outstanding results in the area of authentic performance” (The Marriage of Figaro, 2008).

Born in Greece, he began his studies in conducting at the state conservatory of St. Petersburg, under the tutelage of Professor Ilya Musin, whose pupils, among others, were renowned conductors Odyseuss Dimitriadis, Valery Gergiev, and Semyon Bychkov.