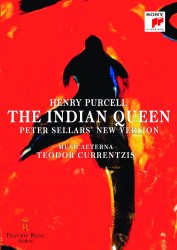 Directed for the screen by Peter Sellars

“What’s incredible about this piece is that it is like Stravinsky – in this radical exciting way in which theatre, dance, music and visual art all combine – but they don’t become a soup called ‘opera’ – they are a salad, a cold dish where you still taste every ingredient. These ingredients are always in dialogue with each other, they don’t just become one thing – the famous melting pot – they remain interesting and keep their own identities. You receive the story from all these different angles – sometimes music expresses something better than anything in the world, other things you feel because of a colour, or a shape, it’s a gesture, or a look, or sometimes its listening to a story and seeing that story in your mind. For Purcell in 17th century London, all of these forms of story-telling were exciting.” PETER SELLARS

The leading German daily Süddeutsche Zeitung wrote: “Sellars has found a worthy soul-mate in Teodor Currentzis, one of the most fascinating conductors of the younger generation …. Currentzis … discovers long and sinuous melodies in the choruses, airs and songs, drawing them out with an intensity redolent of Eastern Orthodox spirituality.”

Semi-opera in five acts and one prologue