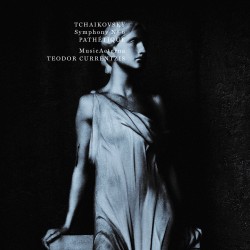 Symphony Nº 6 in B minor

Entitled the “Pathétique”, Tchaikovsky’s Sixth Symphony has always been an important work in Teodor Currentzis’s conducting career, since being deeply affected as a teenager by a recording conducted by Evgeny Mravinsky. Later on, Currentzis would study with Mravinsky’s former classmate Ilya Musin, who was renowned for his authoritative interpretation of Russian repertoire and his legacy of gifted protégés.

Currentzis holds strong views on the symphony and sees universal meaning in Tchaikovsky’s intent. As he explains:

“There are people who, after experiencing a fall, after surviving defeat, find some kind of special place, a special sanctuary. Their place amid the confusion of this world. If they fall repeatedly, then this refuge gradually becomes more and more familiar: it regales them with the sensuality that is lacking in the world above. The first time one is stabbed with a knife, it hurts; the second time, it is borne more easily; the third time, in order that one may survive, it becomes a piece of art. There are no aesthetics when it comes to open wounds.

What I want to bring to this music is not the strong emotionality or the big sound or the excellent form. The thing that I want to bring is the ‘flower of the wound’, the perfection of 110 musicians gathering to have a ceremony for the wounds we endure, not to merely play a concert. It is completely different. Not taking it in objectively as a kind of performance of this music, but as something else. To talk about our wounds and our experiences. So this is very important.