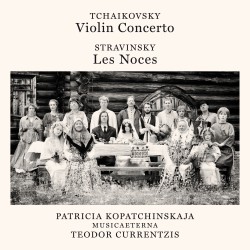 Known for their instinctive and ground-breaking interpretations across an extensive range of musical eras, Currentzis, Kopatchinskaja and MusicAeterna have performed together several times since this first project and consistently garnered audience and critical acclaim. Spiegel Online recently wrote: “No matter whether it is Mozart or Stravinsky, there is nothing that Teodor Currentzis cannot do at present. And things get even better when the conductor works with the idiosyncratic violinist Patricia Kopatchinskaja – together they make a heavenly duo.”

The album also presents a rarer Russian masterpiece: Stravinsky’s Les Noces, for solo voices, choir, pianos and percussion which celebrates a peasant wedding. Currentzis again employs the authentic Russian folkloric influences that were central to his recent interpretation of Le Sacre du printemps and which he considers fundamental to understanding Stravinsky’s music.

Text by the composer after Russian popular texts

Scene 1: At the Bride’s House (The Tresses)

Scene 2: At the Bridegroom’s House

Scene 3: The Departure of the Bride